Cast Iron I have

I'm not going to be posting here anymore.  My darling husband, T, has gotten my my own server space and my own domain name.  I will now be posting my life story at Bikes, The Universe and Everything:

If the link doesn't work, cut and paste this:

Thanks for stopping by.

My wedding band and T's have gone into the safety deposit box for the summer.  I didn't trust Toddler girls not to eat/flush/hide it.  T's been worried about his since he started taking the engine apart on the tractor.  So they both went someplace safe.

Interesting, my hands are enough smaller than his that our wedding rings nest: 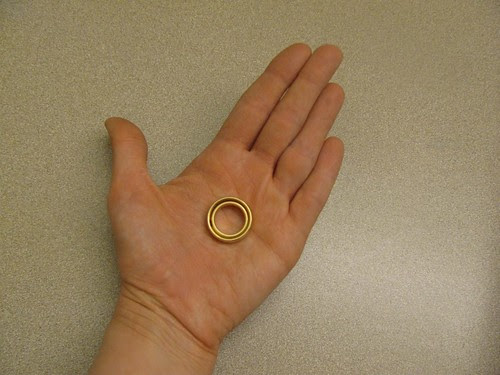 There is something kind of ... romantic about that.
Posted by Erin B at 9:27 PM 2 comments:

The down side of Gardening

I am building muscle mass lifting all those pavers and shoveling all that dirt.  It has caused a huge problem for me.  You see, I am bulking up in my hands.  My wedding ring no longer fits!

Since I got married my wedding band has come off when I wash my hands or bake bread, but only ever for a few minutes.  I had it off for a week before Toddler girl was born.  I didn't want to, but I bowed to peer pressure.  Everyone told me my hands would swell either with late pregnancy or labour and I would need it cut off.  So I wore it on a chain around my neck.  I wanted to put it back on right after she was born, but the nurses talked me out of it.  It tried it on, it still fit, but I didn't go back to wearing it until 24 hours after she was born.

It has been feeling snug for a few days, but last night it was starting to hurt.  I had to soak in cold water and use soap to get it off.

Then, afterwards when I was massaging my hand I noticed this: 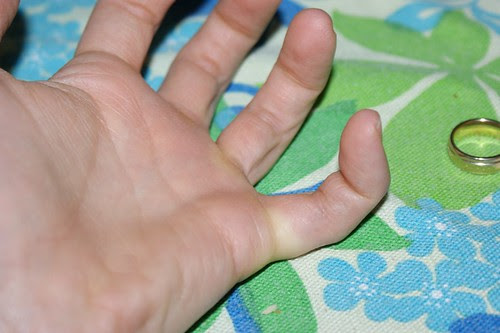 I think it's good that I am getting more muscle mass.... I just wish it would have been somewhere that wouldn't interfere with my wedding band.  I feel even worse about this because I was as fond of my engagement ring.  Then a couple of weeks before Christmas, the Aquamarine (we couldn't afford a diamond) fell out of the setting.  Due to excessive home repairs (and, let's be fair, my new bicycle habit) taking all our extra money, I haven't gotten it replaced.

It wasn't a priority.  I still had my wedding band.  I had always felt nervous about wearing my engagement ring to work.  It was pretty, but had lots of places for bacteria to grow.  Working in a lab, you become more aware of that.

Now.... it just feels wrong to have a naked hand.   I don't know why this bothers me so much but it does.  I'm blogging at my kitchen table with Madeline playing in the background and tears in my eyes. 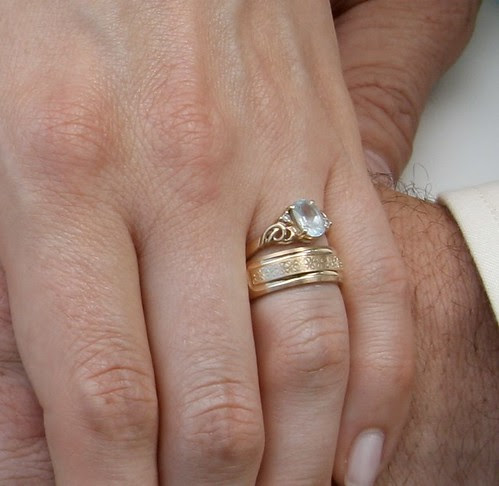 If I had unlimited budget to build a custom bike, I would want one that fit like Claire.  I would have my builder start with her as a blueprint and then make her more pretty.  A more graceful looped top tube or a swan frame.  Prettier lugs.

Then I would steam punk that baby out.  Cooper plate on the tubes, brass coated lugs.  An reproduction antique front light that was secretly powered by a dynamo hub and LEDs.  Brass plated fenders and chain guard with an ornate pattern cut out.  Leather saddle and handle bar grips.  I would want to find a way to put cream Fat Franks on it.  I would want wicker panniers.  I would have a bike that was beautiful to look at, but still had that wonderful ride quality that is so Claire.

And I would be afraid to ride it anywhere in case it got stolen.

But all that stuff is just appearances.  I have no complaints about how Claire fits or rides or handles.  At some point I may have to have her dismantled and sent away for professional powder coating, since the paint isn't as hardy. But that isn't going to change how she handles.

I really enjoy riding that bike and she is perfectly matched for riding with T.

The Nishiki on the other hand.....  is fine.  I only use about three of the speeds when it is just me, but when I have the toddler trailer or the panniers loaded, I need the extra ones.  I just don't know enough about road bikes to know if I could do better.  Or to use it to its full potential.   None the less it fits comfortably and I feel like I can go fast on it.

Either way, I have bicycle contentment.
Posted by Erin B at 9:36 AM 2 comments:

Just go check out the recipe.  It isn't everyday food (because you won't want to have to wash THAT many dishes everyday) but it is a good special treat.

It's could use a little less salt, but don't go crazy it still needs more than half what is listed.  And you CAN NOT use regular salt, it has to be kosher or things just go bad....

They list the Total Time as 40 minutes, but they forgot the 30 minutes of two people frantically washing dishes at the end...
Posted by Erin B at 9:39 AM No comments:

One of those days

This morning my laptop battery failed.  It had been going for sometime, but this morning (after charging all night) my battery charge didn't even last long enough for me to check my email.  It's blustery and gross out so I drove T to work.  Toddler girl stayed home with my mom who is visiting.

On my way to the campus computer store to buy a replacement battery, I saw this: 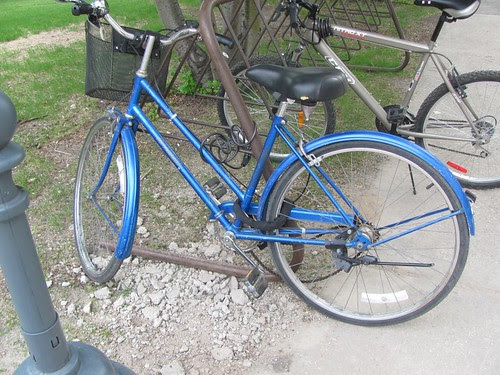 That's the Raleigh I had before I married T and he bought me the ill fated Giant.  It made me feel sad.  The chain is off, the saddle is torn and the fender reflector I had personally custom built for it is bent.  I also learned that it was a Colt.  So really the bike I have now is a better fit, but it made me a little sad that she isn't being treated as well I she was when I had her.  On the other hand, she is locked up with two locks.  I'm not sure what to think.

I may go back tomorrow (yes, I'm a bike stalker) and see if she is still there.

When I came home, I got Ellie and we went grocery shopping.  To Costco.  I hate that store.  Don't get me wrong, it helps our budget to be able to buy in bulk, but the crowds make me ... grumpy.

When I came home I found the basement toilet had overflowed a bit.  A quick go with the plunger solved the problem but it was still a really yucky clean up.  And trying to keep Toddlers from helping is such a problem.

We had eggs and temper tantrums for lunch.

Then I broke down and we watched TV for an hour just to calm down.

After that I unloaded and started to place the 100 lbs each pavers.  T bought another seven from a different store since the one we had been shopping at is sold out.  They look a little different, which doesn't matter, but they are also half an inch shorter on each side.  That matters.

On the long sides of the rows of pavers, I can sort of fake it and it looks OK.  On the short side, it leaves a one inch gap that is a tripping hazard.  To solve this problem I had to pull up four of the pavers I had already laid and replace them with the smaller ones.  Those seven 100 lbs pavers was actually moving eleven 100lbs pavers.

I am exhausted.  Here is an updated garden shot. 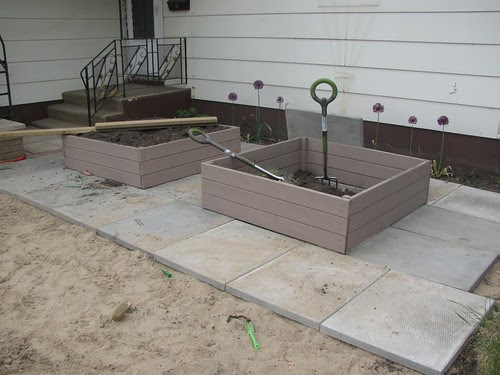 Well, that's one done and three to go!  The eventual plan is four of these planters in a square with concrete pavers running between them.  I'm laying the pavers so that the short side is always against the garden bed so that all the pathways between them will be 30 inches instead of 24 inches.

While the electrician was here, I got another 3 pavers (at 100 lbs each) down and moved 1/2 yard of dirt from the front to the garden bed.  Then I moved the garden bed that was temporarily holding the dirt to the back so it can be stained.

T is out getting me another 1/2 yard of sand.  I kind of hope we can rush to unload it and run to get some more pavers before everything closes tonight.  I got a lot done in Toddler girl's two hour nap.  I could get more done tomorrow too.

I'm not sure if I will need another 1/2 yard of sand after this one, but I know that I will need about 50 pavers before I am done.  After moving 5000 lbs of concrete, I hope to be buff.  That's not why I'm doing this, but there have to be some benefits to being so stiff and tired I can hardly move.

It's funny how the days you can least afford to go out to a restaurant are the days you most need someone else to cook dinner.  I don't know what 2 hours of electrician time runs these days, but I would bet it's a lot.  Fortunately, my extended family is taking are of us.  Blog commentator and Auntie extraordinaire,  Lorene, is going to feed us tonight.  I can't even begin to tell you how much I appreciate that!
Posted by Erin B at 5:46 PM 1 comment: